Ivy is a small, black Cocker Spaniel. A charming, female beauty, born in Turkey about two years ago and at the moment she is on her way to England.

The journey from Turkey

to England is not very easy for a dog however. There are many hurdles to overcome. Its not too difficult to get a flight ticket, if you've got a loving mum like Ivy has, who makes the transactions with the travel agents, but you have to put up with travelling in the baggage compartment in an undersized prison, whilst the two-legged passengers are being served food and drinks by stewardesses one floor above.

The main problems start, when one lands in England. Being a dog, one has to prove that there is no chance of being infected with rabies. Inadequate proof automatically means six months of quarantine. In this situation, quarantine means solitary confinement with hardly any facilities for physical exercise or other social diversements. They should try doing that to a human!

The proof, that the English authorities will accept, is as follows: One has to be vaccinated against rabies at set intervals; one month after the last vaccination, the vet pumps off a large amount of blood, in which he hopefully finds enough antibodies against rabies to enable him to produce a certificate to certify this fact. The last vaccination, the blood test and the certification may only take place in a European country. If all goes well, a passport is issued six months later and the journey into England may begin.

The English are very careful to protect themselves against diseases that they do not have themselves. This care is quite understandable. Recently observations could be made as to the nasty consequences of diseases that they already have on their island - mainly by observing their cattle.

As a dog does not want to be responsible for a national catastrophy, it complies happily with the required extra costs and discomforts that are involved. This is the reason, that Ivy is momentarily residing in Germany.

How does Ivy feel in Germany?

One great difference is the temperature. Its pretty cold in Germany and can certainly not be compared with the Turkish Riviera. Of course a dog doesn't care too much. It has a nice warm fur. Its quite amusing to watch the human wrapping up tactics, so that they don't freeze when they take me for a walk. Its almost like going on an arctic expedition.

When we go for walks the humans tie themselves to me with a long lead. That's very sensible of them. This way they can't get lost and I can make sure that they safely find their way back home.

Humans aren't very intelligent. Sometimes they throw a piece of wood away. Of course a dog cannot accept such slovenliness, so we fetch it back as soon as possible. They quite often throw it away again. Naturally we retrieve it for them again. It often takes quite a long while until they understand that its not possible to get rid of the stick in this way and stop being silly.

Humans also have other peculiar habits. Sometimes they hold hidden titbits in their hands and say things like 'sit', 'lay down' or 'give paw'. All these things can be easily done one behind the other within hardly a second. The correct order has always been executed. What humiliating things one does for an extra delicacy!
December 2000

What has changed since Ivy joined us?

Quite a lot, for example there is a sign on the garden gate stating:

The portrait on the sign has absolutely nothing to do with Ivy. Also, Ivy would never harm anybody. Why the sign then? Hmm, perhaps the sign might persuade one or the other undesired visitor to preferably descend on some other house.

Ivy tries to arouse the impression that the sign should be taken seriously, as far as it is possible for a pretty young lady like her to do so. She has developed a very deep impressive growl if she hears strange noises in the house. Acousticly very convincing - unfortunately the convincement disappears on sight.
January 2001

Does Ivy understand the human language?

The answer could be from Radio Eriwan: Basically yes. 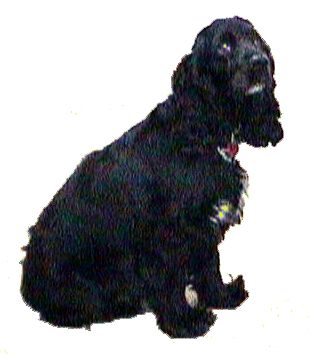 It is amazing how promptly Ivy reacts, when she is supposed to do something that she wants to do. Similarly fast reactions can be expected when titbits can be earned.

However, if she does not want to comply, her understanding of the language sinks to an absolute minimum. Plus the facial expression in which one can see the words, 'I no understand'. In a way she is right. Everybody knows that dogs can't understand the human language.

Observing Ivy's precise reactions when she is in good form, the idea creeps up into mind, that such a little dog is quite well in a position to optimise its partnership with a human. Certainly just as well, as the human is capable of organising his relationship with the dog.
February 2001

The somewhat different world of the dogs

Language and other sounds are not the only possible perceptions of a dog by far. Next to eyes and ears, dogs also have very fine noses. Thus a world is opened for a dog, that humans probably cannot even imagine.

Recently a little desert rat had escaped from its cage. To humans it remained invisible - impossible to find. A trivial matter for a dog. A little sniff, once, twice, thrice and the rat had been located. To stand before to ensure that no further escape was possible, just belonged to the normal service that these humans need. 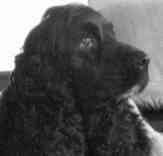 A few days ago Ivy received a lot less understanding for her sense of smell, as she rolled in a delicious smelling heap, that she had discovered on her daily walk. First a barrage of obscene language was poured over her head. Then back home the delicious smell was immediately showered off and replaced by the smell of shampoo. The faces of the humans were peculiarly distorted during this action. The word decontamination was frequently used. Sometimes it really is difficult for a dog to understand the reactions of the human beings.
March 2001

Ivy's attitude to other animals

Ivy has a various ways of treating other animals. Strange dogs are primarily regarded as being possible play friends. Sometimes this hope is fulfilled and a wild game of "tag" follows, in which the boundless energy of young dogs can be seen.

Other smaller occupants of the house like the desert rat, or the guinea pigs are occasionally endowed with a little benevolent interest, but usually ignored. However when a sweet little black dog gets closer to many other animals, they  resort to precipitate flight. The cats in our garden seem to be very sensitive to Ivy's appearance.

A long time before a cat can be seen, much hustle and bustle can be heard from the birds in the area. Usually, it doesn't take long and the cat will appear. This is the exact moment, that Ivy has been waiting for. It is apparently quite good fun to watch cats running. She growls and barks in applause, and the birds seem to appreciate the spectacle too. Their previous excitement quietens down as soon as the trouble-maker has disappeared.

A few days ago as we were out walking, Ivy met a brown toad. At first it lay completely rigid while Ivy sniffed at it. An interesting scene, that terminated with a sudden shock as the toad fled for safety with a big jump.  Ivy's reaction: a tremendous leap in the other direction. Quite a fright, but nothing in comparison to her experience on the 1st of May, a beautiful, mild spring evening.

One has heard of many strange things in legends and fairy stories. Things like terrible dog-eating, fire spitting dragons for example. That was never really easy to believe; much too unrealistic and overexaggerated. So much greater was the feeling of horror as this story proved to be true in the middle of Germany.

The two dragons appeared, peacefully and apparently quite harmless, far away over the edge of the woods. Not really any cause for concern, but their presence on the horizon worried Ivy enough, to ensure that she did not let them out of sight during the whole walk. This was desperately necessary, because the dragons slowly came nearer and nearer, directly towards Ivy.  The sheer size of them was hardly imaginable. The evening sun was gradually darkened by the two gigantic monsters. Then, as they suddenly descended on Ivy, spitting fire and hissing in a terrifying way, she could contain herself no longer. Ivy only just managed to save herself from being caught by the monstrous creatures, by running at her highest speed for about a mile, until they were out of sight. Luckily a dog is much faster than a great big dragon.

About a quarter of an hour later the humans that had been with Ivy turned up too. Amazingly they had also not been harmed by the monsters, although they were so slow. Quite a wonder seeing their careless naivety. Even though they had only just escaped the danger, they were still laughing and telling silly stories about two hot-air balloons that had chosen to land on the open fields.

The last part of the journey

At last - nothing more stands between Ivy and her journey

into England. All the vital formalities have been contended with. A lot of correspondence between England, Germany, France and various authorities was necessary. Dog certainly feels very special when people make such a fuss. It doesn't seem to be a common thing for dogs to travel from Turkey to England.